Making a Most Important Decision

The year 1947 was my senior year at Kingston High School in upstate New York and the family was helping me to decide where I would like to go to school to become an aeronautical engineer. As most high school seniors I had many schools to choose from. There was of course CalTech, but my biggest problem was my grades. At the time you had to be an outstanding student to be considered for admission and my grade point average was really just that: average. There were many engineering schools in the country that I applied to and then there was Parks Air College in Saint Louis which advertised heavily and which offered flying lessons as a part of the curriculum. I had been flying in small planes a few times in high school, as an incentive to join the Air Scouts and also by helping a Navy veteran clear a runway in Phoenicia, NY with flying instructions as payment. My “paying job” was tending bar in the Phoenicia Hotel. So, I was “bitten  by the flying bug”. Parks Air College also offered very low tuition and fees. Finances were a major consideration of the family who supported my ambitions and I applied for scholarships wherever they were offered.

I well remember that I did not make life easier for my mother with my first choice of “higher education”. Yvonne had a strong ally on her side in Dr. Joachim Weyl. Achim was the son of Herman Weyl, Yvonne’s good friend and her former professor at the Zurich Institute in Switzerland. In 1947 Achim was the Chief Scientist at the Office of Naval Research in Washington, DC. He was heavily involved in the post World War II testing of the V2 rockets at White Sands Proving Grounds. When he heard about my “infatuation” with Parks Air College, he decided to invite me to Washington for a quick visit.

This is where my first Airline Flight came in to play. I was happily dropped off at New York’s LaGuardia airport and enjoyed the brief flight on American Airlines DC4 and the fabulous first class service offered. Achim’s wife Sonja picked me up at Washington National and drove me to her home for a very delicious dinner for the three of us. Much of the conversation at the dinner table was about rocket flights in the desert and the potential of a Naval satellite program – Vanguard. I was spell bound by Achim’s tales. Then he and I enjoined to the study for Achim’s favorite mocha, appropriately spiked. 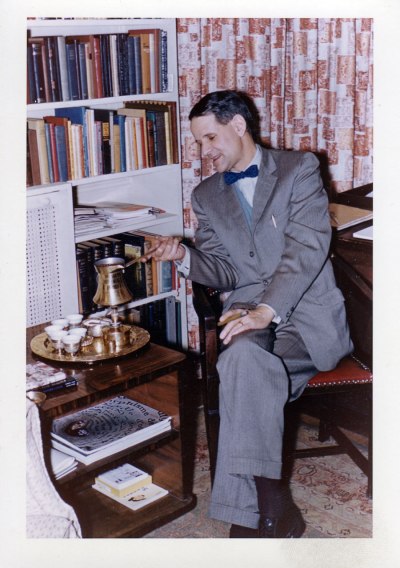 Achim Weyl in his study

Finally, as we sat in his study, Achim asked: “So Wölf, what do you want to be after you finish college: a grease monkey or an aeronautical engineer?” The rocket tales had completely overcome the intense desire to be a pilot. I remembered dreaming of rockets to the moon when I was living in the Buchenstrasse and drew my concepts of such spaceships. We started to talk about Universities and Achim introduced me to details about Purdue as an outstanding University. He outlined a plan for me to follow, highly recommending aerodynamics as a great field to study.

Is it any wonder that not only my mother, my family and mostly that I have been eternally grateful to this great family friend who financed my first airline flight and made me grow up a little?

P.S I never made it to the moon, but there is a scientific instrument on the lunar surface to this date  – not functional any longer – which I participated in developing to measure the strength of the solar wind. It was  left there by the astronauts in one of the Apollo missions in the 1970ies. No Parks Air College graduates participated in that venture, as far as I know!