Wednesday January 23, 1895 dawned brightly on the Fritz Schaper house in the Buchenstrasse in Berlin, Germany where the family of the famous sculptor of the Hohenzollern era of the German empire had plans for a typically active day. On the schedule was a visit to a rehearsal session at the Berlin opera, lunch with close friends, a court appearance at the castle with Emperor Wilhelm II, as well as the weekly meeting of the Wednesday social group in the evening. All these were changed by the birth of the son and heir, Friedrich Emil Wolfgang Schaper, at 9:05 PM, much to the delight of the parents Fritz and Helene, and duly celebrated by some members of the Wednesday social group with champagne. 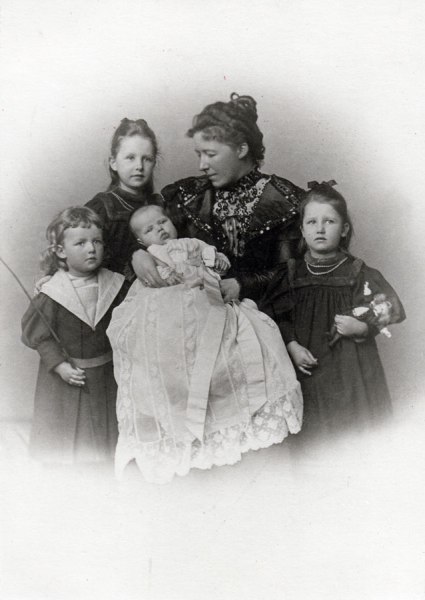 Fritz’s Family in 1987: Left to Right: Wolfgang, Hedwig, Helene with Dorothea and Eva

Such was the entrance into the circle of the artists who were influential in the art world of the early 19th century. Wolfgang was born into the bourgeois, somewhat wealthy environment existing in Berlin before the beginning of World War I. The house where he and his three sisters grew up in was built for his father by a friend as a house to suit an active sculptor and a family man: ideally suited to raise children and maintain the social demands based on the Schaper family. Wolfgang and his siblings were schooled by excellent school systems existing in the German capital and to some extent private tutors. 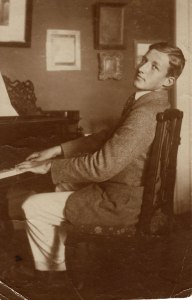 His musical talents were formed through piano lessons and exposure to classical music, through concerts, opera, and occasional private recitals in the home of his family. For entertainment there was a large yard with a considerable expanse of lawn for playtime. Tennis was a sport enjoyed by all and the furnishings in the library were well suited for reading. In addition the family traveled extensively to the mountains and to the beaches in the summer.

Wolfgang determined early in his youth that he wanted to become an engineer, a builder of massive things. He did not contemplate to follow his father’s footsteps, although he displayed considerable artistic talent quite early. All of this came to a drastic end in August, 1914 as World War I broke out: he felt it was his patriotic duty to join the Mounted Cavalry as a Staff Sergeant and was sent to the Western front. On August 26, 1914 Wolfgang was involved in one of the first heavy battles of the war. During a French counterattacks on his battery he was severely wounded, transported to the rear and lost his right leg in the emergency ward of the field hospital. Unfortunately, due to the emergency circumstances, the doctors were not able to remove all the grenade fragments in his body, which had deadly consequences for him sixteen years later. 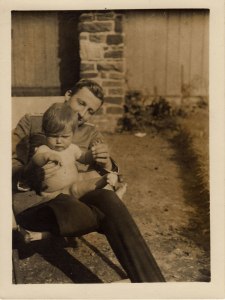 A young adult at 19 years now faces not only considerable physical pain, but also huge emotional turmoil in seeing the dreams for his future as an engineer doomed, and his secure existence in the world shaken. He finds also that the emergency amputation of his right leg is not perfect and requires several months of further surgery and considerable physical therapy. His outlook on life changes from that of his family, but the solid foundation of his upbringing does not overcome his optimism. Sometime in early in the year 1916 he meets and falls deeply in love with a young married woman, Elsbeth Schwab, nee Bieber, who is also the mother of three sons and a French citizen by marriage. The tumultuous political circumstances of the times force Yvonne to move to Zurich, Switzerland toward the end of 1916 and the young man has to be satisfied with carrying on a romantic correspondence “via long distance” letters and occasional telegrams through four years! It is not until 1925 that the couple marry, united in Starnberg, near Munich, Germany.

The Building of a new Career: 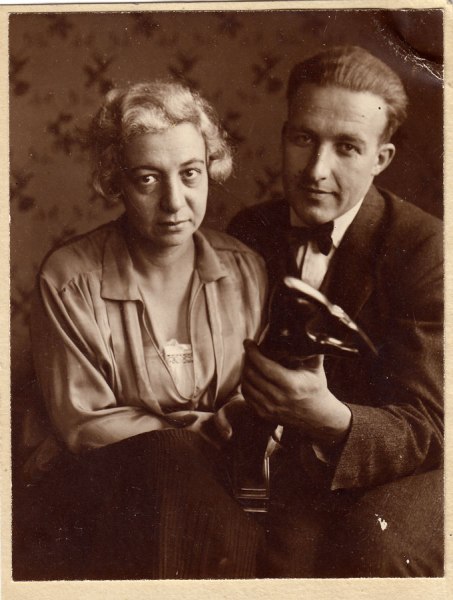 It is necessary to remember that at the time of World War I recovery from a severe wound took a long time by itself. Therapy for the loss of limb and fitting of a prosthesis was still quite primitive and few surgeons very skilled in the techniques involved. Wolfgang, once returned from the front lines, spent much time in hospitals and at home for just the healing process and associated therapy. This was followed by time spent in sanatoriums, allowing him to reconsider the course if his future. Thus it was not until 1916 that he earnestly decided to seriously enter in the field of the arts and enroll in the Academy of Arts in Berlin to study painting under the tutorship of a former student of his father. Concentrated his efforts toward painting because he displayed considerable talent which he felt needed some professional direction.

In order to meet the demands for concentrated study, he rented a small apartment in Berlin where he was undisturbed. From his correspondence with Yvonne and his sister Dorothea, the apartment essentially consisted of a single room with a very large couch (nicknamed as “the pasture” because of its size), a work table and, of course, the necessary bath and sanitary facilities; very much unlike his parents’ home where Wolfgang no longer felt comfortable. Only a few sketches from his work in the apartment survived him. The going was rough especially in the winter months when he felt unsure of himself walking with crutches on icy or snowy streets of Berlin. It was not until 1920 that his life began to turn around.

Yvonne finally decided to end her marriage to Jean Schwab legally and moved to Berlin with her three boys. Wolfgang, with the help of his sister Dorothea and cousin Ingeborg managed to find a house in Starnberg, an artist colony near Munich. In 1921 the family of five moved into the house and Wolfgang’s career started to take off with his first oil paintings. Although these were at first renditions of scenes by the lake, they quickly were accepted as being of a unique style and Wolfgang’s reputation as a gifted artist began to build rather quickly. In 1922 Yvonne’s sister, Dr. Annemarie Bieber, managed to connect Wolfgang with Professor Sauerbruch, a famous surgeon in Munich, who was once Annemarie’s teacher. Wolfgang underwent some reconstructive surgery which enabled him to move around more easily. The improvement was significant as evidenced by his taking up playing tennis, again, once his favorite sport. Another significant improvement became evident in his work in that he now chose scenes other than Lake Starnberg for his painting since moving around and being able to travel more easily offered him impressions other than the lake. Wolfgang also realized that he was now more capable of broadening his talents to the creation of clay statues.  Finally, on May 5, 1923 the couple is married in Starnberg and another chapter in Wolfgang’s life begins.

Wolfgang’s Enthusiasm For The Fine Arts:

Starnberg and Munich certainly marked the beginning of Wolfgang’s reputation as a serious artist setting his own style; it soon became clear that Berlin offered him better opportunities to ply his art, while expressing his love of sports. In 1926 he found, with the help of his sister Dorothea and cousin Ingeborg a fairly large apartment in the Luitpold Strasse in Berlin, not far from his parents’ house. It was here that he submitted two statues of a discus thrower and the runner, Dr. Pelzer, to the Olympic Committee for competition in the 1928 Olympic Games’ artistic contest. These works marked the beginning of the creation of many other sports figures well known at the time and they received long range fame, the discus thrower being placed in the Sports Stadium in Berlin, where it can be seen today. Many of the subsequent sports statues are featured in reference cited in Reference [1].

Aside from the enthusiasm for the modeling of sports figure, Wolfgang continued to his depiction of his surroundings on canvass in oil. In contrast to his earlier depiction of scenes in nature, he painted the night scene of the Landwehr Kanal as seen from the Bendler Brücke, capturing the mood of a modern street scene in the city during a busy traffic period, something quite different from his earlier paintings.

His early love of classical music now found expression in playing the piano or his beloved Harmonium in the Buchenstrasse with masterful technique. This love was also expressed in writing love songs for his wife for soprano and piano. He also left behind a diary of poems decorated with appropriate sketches. His relationship with people around him reflected his outgoing personality and congenial nature.

In 1928 the long awaited son and heir, Friedrich Peter Wolfgang (Wölf) was born. A year later and after the death of Wolfgang’s mother, Helene, the family moved into the Schaper house in the Buchenstrasse. By this time Wolfgang’s reputation was being made in the artistic circuits of the capital of Germany. Wolfgang was working on his final statue, the Lebensfreude (Joy of Life) which he was unfortunately not able to finish. While his wife and  2-year-old-son were beginning what was to be a traditional vacation at the beach on the Baltic Sea, he was stricken by a serious case of blood poising due to a piece of shrapnel left in his body in 1914. On August 6, 1930 Wolfgang Schaper died in spite of the best efforts of the doctors tending to him.

Yvonne’s Comments On The Loss Of A Budding Artist  And Adored Husband:

“Wen die Götter lieben…“ [Whom the gods love dies young”] – Yvonne used this old phrase quite often after her husband’s death, and rightly so. It seemed that Wolfgang was slated to become one of the highly regarded artists of his time. The Schloss Bellevue in Berlin exhibited the unfinished statue of the Lebensfreude in his memory before it was eventually completed by his sister Dorothea Schaper-Barthels. It remained as a testament to Wolfgang’s spirit of optimism under all circumstances and will always serve to remind his family and people who see it – alas in pictures only – that life is a great gift given to all, even if it is hard at times. Before World War II it found its place in front of the hospital where he spent his last days. 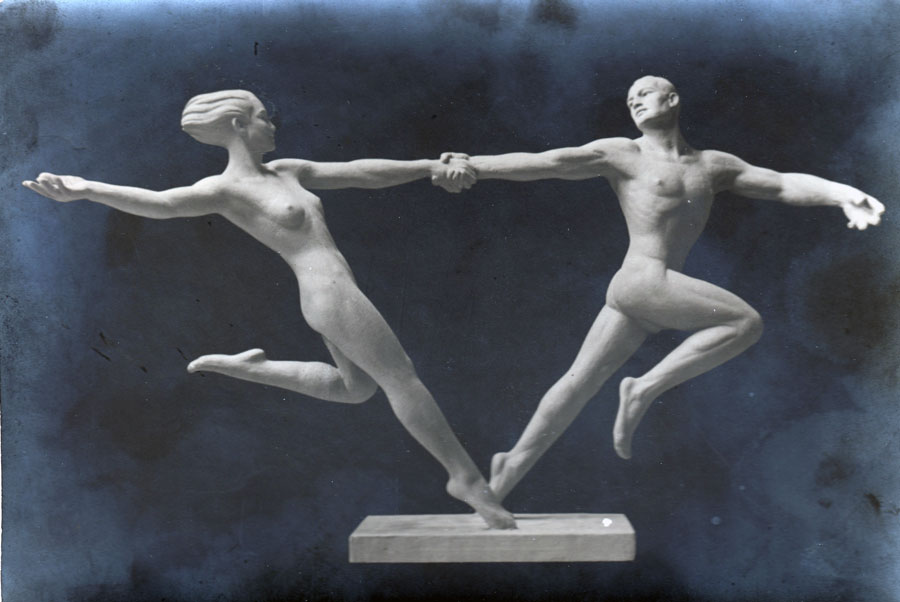